So as my head slowly clears today I thought I should try and put together some thoughts about the excitement of last night.

For those of you who don’t know, last night was the annual Daily Echo Curtain Call Awards ceremony.  A chance for all the theatre companies in the South to get together and celebrate a years worth of brilliant local theatre.

We were delighted to find out that the 2 shows we created in 2015 received 8 nominations for different categories.

Last night Tomorrow, Maybe was the big winner, picking up 3 awards.  Best Newcomer for the show, Best Musical or Opera, and the big award of the night Production of the Year.

To pick up this coveted award for a show that is so special to all of us involved really meant a lot, and of course we celebrated well into the night.

I really have to thank all of the team for 2015. it has been the best year ever for our little company.  I was reminiscing with Becky last night that we have grown from a tiny company with half a table at the Curtain Calls to overspilling 2 tables with wonderfully talented and lovely people last night.

To everyone I have worked with, thank you.  Whether you were on stage or off, for either production, you have helped take Stickprod further in a year than we have thought was possible.  It has been an honour to work with you all and I have learnt so much from it.

Thank you to everyone who has supported the company, seen our shows and helped where you can.

2016 brings new excitement working with Amies and Clements and Aardvarks Can’t Jump Productions to bring Tomorrow, Maybe back to Asante in Romsey in April.  Please keep your eyes peeled on Facebook, Twitter and on here as we will very soon be releasing ticketing information for the run.  Don’t forget we sold out the full 2 weeks last time so make sure you get in quick to avoid disappointment.

Thank you again for your support

Check out these early shots from our Urinetown rehearsals:

These are from very early on in our rehearsal process, keep checking back here for more as we get closer to the show

Exactly 5 years ago today we opened our very first show, The Last 5 Years by Jason Robert Brown at The Hanger Farm Arts Centre in Totton. I can remember it well with both very proud memories and recollections of terrible nervousness on my part!

To be opening the first show we had ever put together as a new company and the first show I had ever directed was scary enough, but when Martin our lighting designer/engineer was held up and I had to set the lighting to show state I discovered a new level of panic I hadn’t realised existed.  Carefully (or so I thought) following Martin’s instructions I pressed the buttons I thought would send control of the house lights over to the lighting desk.  What resulted can only be described as some kind of 90s rave lighting effect, with lights seemingly randomly switching on and off throughout the auditorium.  Luckily the in-house technician was able to assist, and Martin soon showed up to get everything fixed so that we were ready to start on time.

What followed was an incredible performance from 2 actors at the top of their game, and 2 brilliant musicians to create a show that I will always be very proud of.

That was 5 years ago, it’s crazy how time has flown by.  After that show Stickprod took a bit of a break.  I was caught up doing other things, and the follow up looked like it might not happen.  Then in 2013 we found our next show.

The 25th Annual Putnam county Spelling Bee saw the beginning of our new fuller production team, sadly Matthew Cundy moved on after Last 5 Years and is now a professional theatre producer, (if you are in or going to Edinburgh this year, check out Ushers the Musical).  Stepping in as MD for Spelling Bee was Teddy Clements, who as many of you reading this will know has now become a permanent fixture on the production team, and has opened up a much bigger and brighter future for Stickprod, not least for introducing us to a lot of the people we are working with now. Becky Milne became Rebecca Bailey and as she is now a professional actress, moved over to co-directing with me.  We also had the wonderfully talented Dannie Spencer as our choreographer. Between us we put together a fantastic cast and band, and Spelling Bee was a great success, again testament to the phenomenal performances by all the cast, band and crew.

That’s not to say we didn’t still have the odd nervous moment.  When the computer that contained all the pre-programmed sounds for keys 2 died on opening night the rave lighting feeling came flooding back!

After Spelling Bee we all worked together briefly again, this time on-stage as performers in Variety Relief for Wave 105’s Cash for Kids.  Then Becky and I had to take a brief break as we had a production of our own to organise, but soon after we were back from our Honeymoon, work began in earnest on preparing for our biggest year yet!

Teddy had introduced us to Stephanie Amies last year, and we asked her and Ted to write us a show.  I will talk more about it in another blog, but 12 months (so far) of some of the most rewarding work ever from all involved meant we were able to stage the world premier of Tomorrow, Maybe to sold out audiences for 2 weeks in May this year.

Not content with one show this year, we are now onto another!

Urinetown The Musical is the biggest show we have ever produced.  With 19 incredibly talented cast members, and a specially made set we have had to move home to the Romsey Plaza.

This time around Musical Direction is by Sam Dando, who played keys 2 for Spelling Bee, and continued on as co-MD for Tomorrow, Maybe.  Teddy has joined Becky and I as co-director for this show, and we welcome the super talented Christina Finn as our new Choreographer, after Dannie moved away to Manchester.  Daniella Gambier has, since Tomorrow, Maybe, taken on Producer duties, which has helped ease the nervous moments, but I’m sure there will be something that will get my pulse up to critical level again, just before we open.

You need to come and see Urinetown!  I have never worked with so many talented people at once, the show is sure to be brilliant.  I promise laughs and shocks, and a few surprises.  Get your tickets now!

It has been an incredible 5 years, I’m really proud of what we have achieved.  I can’t thank Adam Case enough for making it possible, and of course everyone else who has been involved. we have created brilliant productions, won awards and raised thousands of pounds for charity.

Following this entry will be a whole load more from the cast and crew of Urinetown. You should hopefully get a bit of an insight into our rehearsals, and a bit of a back stage look at what it takes to put together this show. 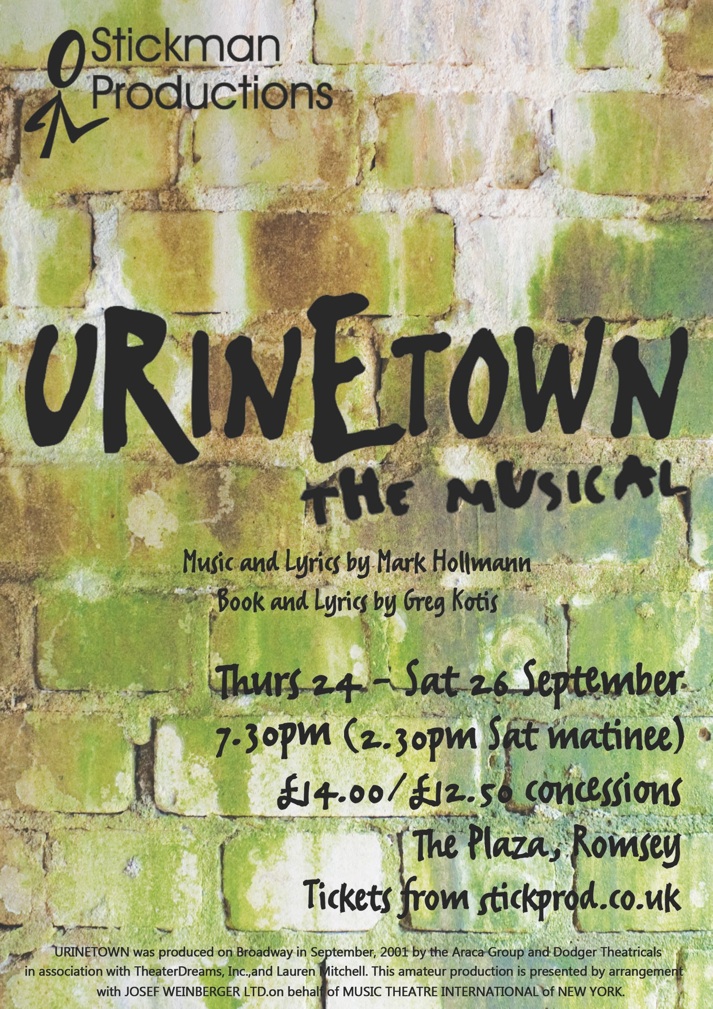